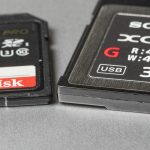 Since the recent new camera announcements at and just prior to Photokina 2018, there have been an untold number of discussions, videos, and so on about the terrible decisions that the camera manufacturers have made to only include one memory slot in their new mirrorless cameras. I am currently in the process of testing and reviewing the Nikon Z7 mirrorless camera, which … END_OF_DOCUMENT_TOKEN_TO_BE_REPLACED